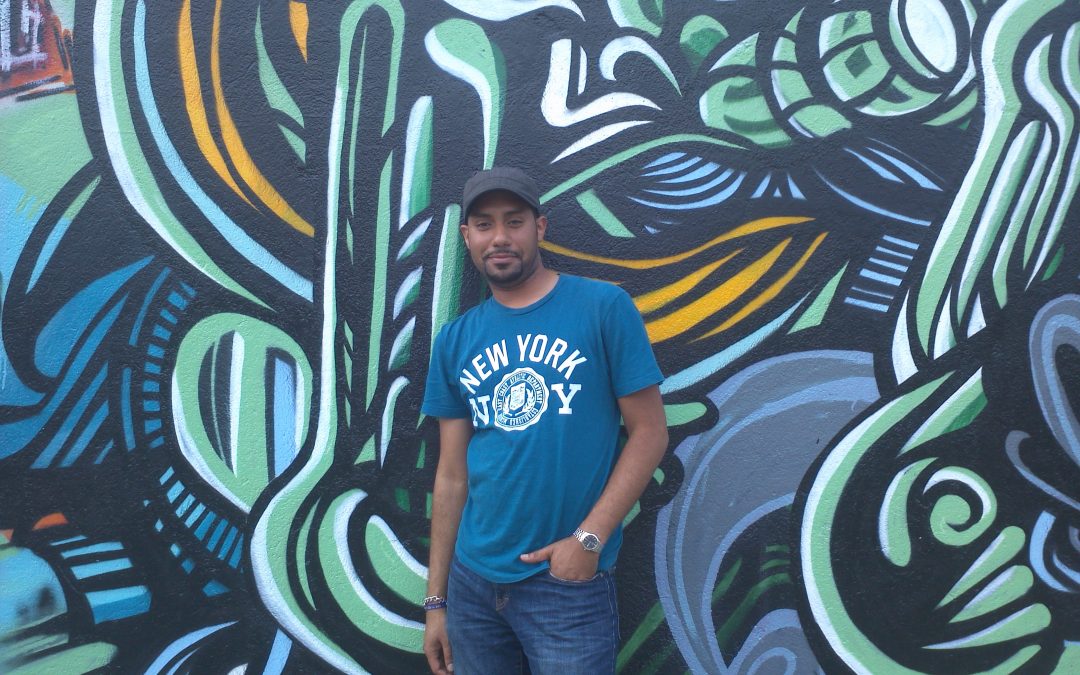 They called me “100% gringo.”  If I had been white enough to blush, my anger and frustration would have instantly been revealed.  However, my skin wasn’t white.  They didn’t see my anger, frustration and shame.  Back in the United States, calling a Latino a gringo was either a bad joke or an insult good enough to start a fist fight.  But, I wasn’t in the States; I was in Nicaragua.  I swallowed my pride to try and understand why they thought it was okay to refer to me as a gringo.  I was born in Brooklyn, New York to a Dominican father and a Puerto Rican mother.  I was raised within a tight community of Latinos in West Michigan.  My cultural heritage is Latino.  My culture in practice is Latino, specifically that of Dominicans and Puerto Ricans.  More often than not, I’d rather converse in Spanish or Spanglish, and eat Caribbean foods.  I relate to others through a Latino lens.  I am Latino.   However, during my time in Central America I was treated as an outsider to the Latino culture.

When Christ entered the world, He was rejected by His own people.  John 1:10-11 says, “He was in the world, and though the world was made through him, the world did not recognize him.  He came to that which was his own, but his own did not receive him.”  “His own did not receive Him…”  Those words have never rung so true to me as they did after my experience in Central America.  In general, natives of Latino countries misunderstand the dynamics of the life of Latinos in the States and therefore often treat them as cultural outsiders.  A generation of Latinos raised in the States is going/coming home to their people, only to find themselves unwelcomed and misunderstood.  These Stateside raised Latinos also experience a similar rejection right where they live in the U.S.  We’re always under suspect.  Do you have a green card?  Where are you really from?  What’s with the accent?  Why do dress like that?  We’re American, but we are treated as something “other” because we don’t measure up to the cultural standards of the White American, forcing us to conform to a process of acculturation to which we will never be, “good enough.”  Perhaps even more hurtful is to be treated as “other” by foreign born Latinos who live right alongside U.S. raised Latinos, shopping at the same grocery stores and going to the same churches.  If you’re really Latino, why do listen to that White music?  Why is your Spanish so terrible?  We live in a hyphen, between two worlds, without a real place to call home.  Rejection has become the sanctuary where we gather together.  In my experience as a Latino American, I have come to identify in part with the experience of Christ’s rejection by his own people and with the Christ who had nowhere to rest his head.

When I was young, I spent a significant amount of time in the Dominican Republic in the barrio of my grandmother.  She lived in the southern end of Villa Mella where the world of el campesino (country person)meets urban Santo Domingo.  In other words, it’s a very poor area where rural culture clashes with urban development.  It’s not too bad if you know how to get around.  You don’t have to search hard to find some of the best chicharones (pork rinds) in the world there.  And you don’t have to search too far to find some definite misperceptions of what life was like for me and my family back in the states.  If ever there existed a money tree, the people in the barrio of Villa Mella thought for sure I had one in my backyard in Grand Rapids. My reality, however, was the opposite of their perception.  Often, my family survived on the mercy of others.  We barely had enough money for my siblings and me to get on the plane to go to Santo Domingo.  Our suitcases were packed with someone else’s hand-me-downs that we received from a local church, the one where we had to stand in line outside with all the other poor families while the gringos drove by on their way to work.  I arrived in Nicaragua ready to deal with the misperceptions of my bank account.  However, I was unprepared for people attempting to strip me of my cultural heritage.

Part of my experience growing up in West Michigan was being a part of a Spanish-speaking church plant on the south end of Grand Rapids. There I witnessed several failures in ministry.  There was a lack of cross-cultural capacity within my church to minister within different Latino subgroups in the church and to share the gospel to the surrounding outside community.  Other issues included breakdowns in the church’s organizational structure, leadership development and outreach to youth.  Growing up in this culture and environment, I purposed in my heart to acquire the resources and skills needed in my urban community and to learn to exercise them well, in order to share them with those living and serving in the urban environment.

Growing up I felt the major gap between the Immigrant Latino Adult ministry and the ministry to the Latino youth raised in the U.S.  There was not a youth ministry available to me that ministered to my needs as a Latino-American. I jumped back and forth between the extremes of youth ministry at conservative White churches to a piece-meal Latino youth ministry in a church all-together unaware of how to serve adolescents.  In many respects, I was treated as a stranger in both places. No one seemed to understand where I was coming from.  Not by choice, I learned to navigate both of these worlds, but always with the desire for a form of ministry that would quench my desire to be reached in the hyphen in which I was forced to live.  I decided this too would be my quest, to grow in a way that I could reach back to the young Christian leaders living in that same space.

This summer I spent time doing mission work in Central America (mainly in Nicaragua and a short time in Costa Rica), with the goal of further equipping myself for ministry in the urban U.S. Latino context.  There, in Central America, I heard some things that broke my heart.  I heard Latinos in the States referred to as everything from gringos to political traitors.  How does a father or mother risking their life and freedom to cross into the States become a political traitor to their country, just for wanting to feed their children?  When did the desire for abundant life become political treachery?

I was the first Latino from the U.S. that several people in Nicaragua had ever met.  The fact that they didn’t know how to receive me, as in whether to give me plantains or cheeseburgers for lunch, broadened my perspective to the needs in the Latino community.  There is not just a gap between immigrant and American-raised/born Latinos in the states.  There is, in many respects, a far larger gap between Latinos in the U.S. and those in living in Latino Countries.

I blame the Disney Channel.  I blame movies and the stereotypes that are translated through them.  During one of the few time periods where I had down time, I was watching a movie with one of my host families.  In this movie, a character played by an African-American woman was yelling at another character in the movie (who happened to be a Latina that could easily pass for White). Then they asked me, “Are Blacks always angry like that?”  In a time where Latinos are generally disempowered in the ability to create intentional international interaction to and from the U.S., the media and ignorance on both sides have fostered this gap for too long.

I don’t entirely blame the media.  Sin is also a factor in the conversation.  When we take our lives and our culture as the standard by which everyone else should live, we set ourselves up as idols to be worshipped.  We make our culture the god to which all others must bow.  What I experienced in Nicaragua was an augmented form of something I experienced as a child growing up in West Michigan, where the few Latinos that could be gathered to worship together were never really together, as they were always comparing cultural notes as to which people group had the right idea; the Mexicans, Guatemalans, Dominicans, etc.

White missionaries permeate the country of Nicaragua.  At times the indigenous leaders expressed to me their frustration about not being fully able to be on the same economic, social, and educational level with their American co-laborers.  When my host father expressed that he felt inadequate as a pastor because he never learned English, it broke my heart.  I heard the voice of my own father trying to navigate the tumultuous tides of being a Latino church leader in America.  I heard in my host father’s words the voice of my high school friends who felt ostracized by their own immigrant relatives because they never learned to speak and read Spanish up to their relative standards.  I wonder how we can learn from one another?  Can there be a bridge built between these two groups of people?  Why are Latinos from the States not being empowered to go serve as missionaries in Latino countries?  Well versed in the pains of cross-cultural living, they are natural leaders in this area of ministry; yet, they are in need of validation to go and serve the Lord on a global scale.

There is a need for the generation living in the hyphen, in the place between American acculturation and Latino culture, to rise and become the much needed bi-cultural bridge and minister to both worlds. Despite some of these cultural issues I experienced in Nicaragua, I was not dissuaded from God’s calling on my life to serve among Latinos.  If anything, I feel God affirmed me that calling, to the local and global Latino community.  And in order to be an effective minister to this community, I have to learn to be comfortable living in the hyphen.

My best friend, who is of Dominican descent, was born in Brooklyn, NY.  Actually, we were born in the same neighborhood, just a couple of years apart.  However, his family moved back to the Dominican Republic and a large part of his life was lived in the D.R.  Now, living in Grand Rapids, when people ask him where he is from, he usually starts by saying, “Well, I’m a very confused individual.  I’m American, but…”  I hear him say this and I don’t think my friend is confused at all.  He says this to make others feel comfortable with his person, with his cultural identity and with his ministry.  He reminds me of Paul, who says in 1 Corinthians 9:22, “To the weak I became weak, to win the weak. I have become all things to all people so that by all possible means I might save some.” This is not just the space where we find ourselves, but the space to which God has called us. We are called to rejection. We are called to be the bridge that gets walked on, rolled over and seen as another means to get by.  We are called to lay down our lives for the gospel in a way that most people will never comprehend, except for those who most need a place to step forward in a way that we are uniquely able to provide.