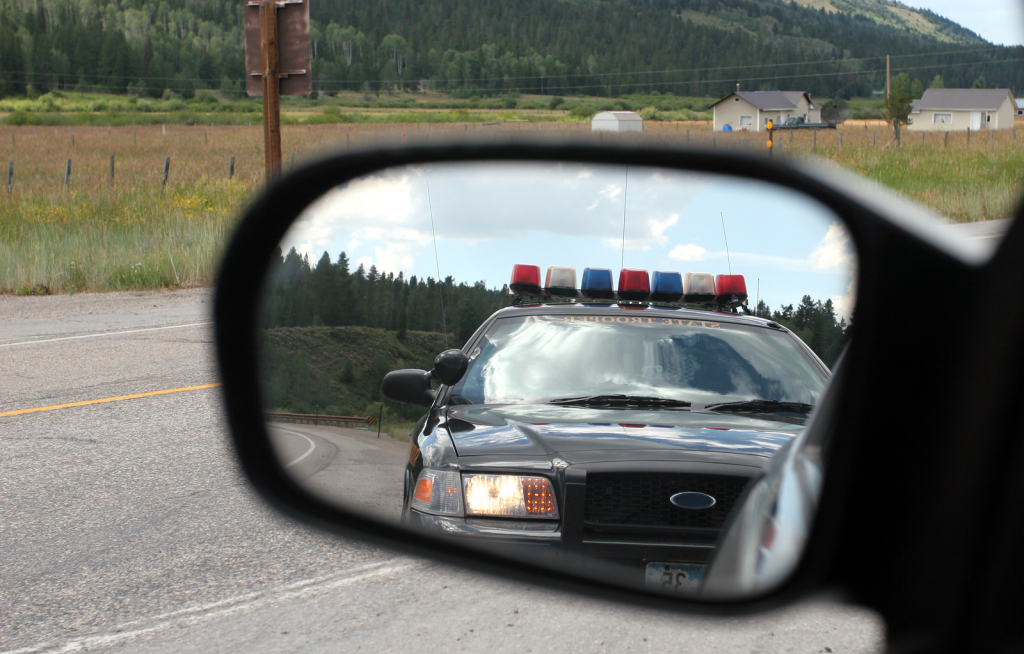 The red, white and blue lights flashed in the mirror and the familiar sting of fear crawled through my stomach. “Not today,” I thought. “Please, don’t let it be today.”

The lady riding in the passenger seat of my vehicle whispered to me, “Just stay calm.” Her short, curly, gray hair had been recently cut. And she was wearing her Sunday best with her favorite hoop earrings. We were on our way to church when the blare of the sirens and lights called for us to pull over. I double checked – did she have her seat belt on? Of course, she always did. Did I have mine? Yes, it was buckled in. But, the last thing I wanted to be at the moment was restrained

My father always told me, “When the police pull you over, quick have your wallet in hand.” — Never an “if”, but always the “when”. — “Keep your hands on the wheel where the officer will see them.” My dad’s eternal words of counsel – “Try not to drive at night, that’s when the police get busy.” If it wasn’t so serious, I might’ve made it into a bumper sticker. In either case, this was a Sunday morning.

An officer stepped out of the patrol car behind us. Automatically, I sized the situation up. There were no other vehicles around. The street was empty. No witnesses. White neighborhood. White cop. Male. Shorter than me. Me – church shoes, suit and tie. Brown. All brown. My window was already down when he came alongside the driver’s door.

“I need to see your license and registration.”

He took them from my hand. “I need to look these over.”

“I didn’t think I was speeding, Sir. How fast was I going?”

“I didn’t track your speed. You looked like you were speeding.”

The officer walked back to his car. My friend and I didn’t speak to each other. She stared ahead. I looked forward as well, with occasional glances in the rear-view mirror. Red, white and blue were still flashing. After several minutes, he came back to give me my documents.

“Why are you here? Where are you going?”

He eyed my suit and my friend. She was a tan-skinned mannequin, staring forward in silence.

“I’m going to follow you till you’re out of this neighborhood.” Then, he walked back to his patrol car.

My wallet stayed in my lap along with my papers. My hands stayed on the wheel at the 9 o’clock and 3 o’clock position. The lights die down behind us as we move in silence. He followed us through the next few turns. After we traveled about a mile southeast in slow motion, he pulled a U-turn and disappeared.

I wish I could tell you that the above story is the first time I’ve experienced racial profiling. I wish even more that I could tell you it was my last. I was on my way to church in a Kia Rio and somehow I looked like I was speeding. Let’s look at the amplified translation. Your kind isn’t welcome here. Let me see if there something in your background that will allow me to handcuff you and if not, then find your way back to your own neighborhood.

My stomach has remained in knots since the news about Michael Brown and Darren Wilson. Or was it the news on Trayvon Martin? Or Tamir Rice? Or Eric Garner? I can’t keep up with the names anymore. I feel like we’re living in a dystopian future, like the Hunger Games. Except this isn’t fiction. These are real people. We, people of color, are real people. Every day we lose another tribute. A sacrifice for someone’s greater good. And we’re told we should be grateful for what we do have. This is not about whether or not one person is innocent or guilty. This is not about one isolated incident what will become American history. This is about racism and the uncured wounds of racial suppression. This is news to the majority and common suffering to the minority. This is reality, but not for all of us.

At some point the dominant American consciousness decided that we live in a post-racial society. Racism was something that was taken care of in the civil rights movement, right? I’ll never forget sitting at a desk in a Christian college classroom when a guest speaker was invited to teach on diversity and racism. He asked the class a question. Does racism still exist in the United States? I was speechless when everyone in the class seemed to come to the consensus that we did in fact live in a post-racist society. I sat in silent horror and then did the math. All the students in the classroom were white, except me. Then the speaker came to me and looked me in the eye, one brown-skinned brother to another. What do you say? I paused for a moment and made the decision to make myself vulnerable. “Well,” I spoke up, “a white man called me a nigger yesterday at the grocery store… so, I’d have to say racism still exists.” My peers looked at me stunted. A couple of them had shame in their eyes. None of them had even looked my way during their conversation. How would you know that racism does or doesn’t exist without having a conversation deep enough with someone who would be the object of said hatred? Rev. Dr. Martin Luther King once said that, “Riots are the language of the unheard.” Has anyone stopped to listen?

Is the church listening? I’ve heard my fair share of racist remarks. The worst? Social justice is a distraction to the real ministry of the church. I am more ready to deal with the white guy at the grocery store that calls me the N-word, than for a minister of the Gospel to tell me that the suffering of my people, my family and my community is a distraction to your preaching. If that’s your church do us a favor and put up a sign – Minorities Not Cared For Here. If preaching is all the church plans to do when we see a city on fire and hundreds of African-Americans and other people of color crying in the streets around the country, then the church is missing the mark. As I write this I have two white brothers sitting at my table, lamenting the state of affairs in our country, tears in our eyes. But, as I mentioned before, this is bigger than just one or two people. Racism is not an individual battle.

What if the collective church would rise to become what it was intended to be – a light to the nations? What if this time it won’t be the last one to join the fight? In the contemporary testimony of *my denomination, the Christian Reformed Church (Our World Belongs to God), Article 41 reads:

Joining the mission of God,
the church is sent
with the gospel of the kingdom
to call everyone to know and follow Christ
and to proclaim to all
the assurance that in the name of Jesus
there is forgiveness of sin
and new life for all who repent and believe.
The Spirit calls all members
to embrace God’s mission
in their neighborhoods
and in the world:
to feed the hungry,
bring water to the thirsty,
welcome the stranger,
clothe the naked,
care for the sick,
and free the prisoner.
We repent of leaving this work to a few,
for this mission is central to our being.

I think this hits the nail on the head. The church needs to not just preach, but act. The church must take the lead and not the tail in the battle against injustice. Racism, stereotyping, racial profiling and the abuse of power to suppress a race or group of people is a sin. We’re so willing to call out sin in the world, but we cannot fail this time to call out the plank in our eyes – silence and compliance. If our brown-skinned brothers and sisters are stopped on the way to Sunday morning service, what more will we wait for?