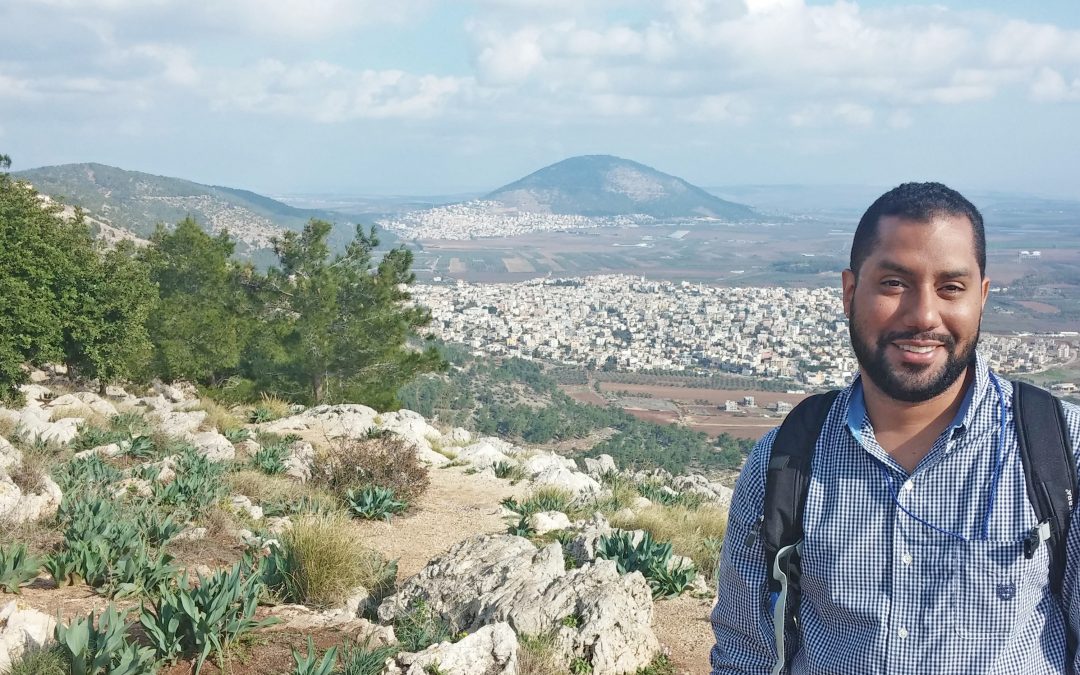 “Ethnically ambiguous.” I have adopted this short phrase to describe my appearance. Most people in West Michigan cannot identify my ethnicity without asking. Really, I am the love product of a brown Dominican daddy and a fair-skinned Puerto Rican mom. You can see that in my own caramel skin, dark eyes and wavy hair. But, I have often been mistaken for African-American, Indian, Arab and various “other” Latino ethnicities. I used to sing in a choir at an African-American church for several years. Only as recently as last year did the choir director approach me to say he didn’t know I was Hispanic. After a hilarious exchange, he concluded the conversation by saying, “Well, you’re still Black to me!”

This past January I went to Israel with a group from Calvin Seminary. Once again I had to decide if I would keep my black beard and get the not-so-random security check or shave it off and cut those chances in half. After several hours of indecision, I decided to not shave. It shouldn’t surprise you that by the end of our pilgrimage to the “Holy Land” I had been given the evil eye and questioned several times by Israeli guards and airport security. For a fragment of time, I entered the world of the Palestinians.

I became most conscious of the divide between Israelis and Palestinians when our crew visited the town of Bethlehem. Present day Bethlehem is a Palestinian community in the West Bank of Israel. To enter Bethlehem, we needed to pass through the literal dividing wall of hostility that surrounds the West Bank. Just as I made the conscious choice to keep my beard, regardless as to what would be assumed of my ethnicity, at the checkpoint I made the decision to crouch away from the tour bus window. I didn’t want to be seen by the Israeli soldiers. I had seen enough guns and soldiers and I confess that with my passport in my backpack, I was ready to exercise some American privilege. I wanted to avoid the embarrassment of being questioned by guards in front of my peers. And ironically, as I thought about that passport, I felt a sense of shame take hold of me. Is this what it feels like for the Palestinians? Is this what it feels like when the have to stand in line every day at the checkpoint just to get in and out of the city?

We chose the perfect day to visit the Church of the Nativity in Bethlehem. No, not really. We learned on site that a young man was shot and killed by Israeli soldiers the night before. I saw a procession of mourning Palestinians clothed in every rich shade of black and on their way to a funeral at the same church we visited. I saw a man in that multitude who reminded me of my father before I could think twice about him. His salt and pepper hair gleamed in the morning sun while he stared at his feet and followed his shadow on the stony pavement. His eyes conveyed such a deep sense of loss. I saw young men in the streets, burning tires in protest at the injustice of the shooting of one of their brothers. I was reminded of the young people on Madison Avenue in Grand Rapids, who often hold their poster signs in silence at the Hall Street intersection, hoping for change.

After visiting the church, we went to Bethlehem Bible College. I was amazed to learn that there was Palestinian Christian college in the West Bank.  Palestinian Christians are striving to be faithful to the Gospel hope in a context of apartheid. Inside, Dr. Munther Isaac walked us through a brief history of the Israeli-Palestinian conflict. This was the second time we had the opportunity to learn from a professor through this walk of history. But, listening to a Palestinian Christian witness to us about how Palestinians are robbed of their property and subjected to constant inspection shook my core. Families are being divided by the contribution of American dollars. As I listened, I was again ashamed of how I felt at the checkpoint. I was ashamed for my American and Latin American brothers and sisters who rally a cry for Zionism without a moment’s thought at the cost someone has to pay in return. I became enraged when I considered how the same Bible that I use to preach shalom and reconciliation between God and men has been used to support theft and abuse of the Palestinians.

I can never unlearn what I learned that day any more than I can erase what I saw. After we left Bethlehem Bible College, the streets were burgeoning with protests. We walked several blocks to our waiting bus. Walking the streets of Bethlehem during the protest was not a fearful event for me. I perhaps never felt safer, even at the sound of tear gas shot into the air and watching the smoke in the distance. God chooses to shed the light of Christ first in Bethlehem. Angels shouted His praise in that same smoke-stained sky. Hosanna in the highest. Bethlehem changed me just as much as standing at the Jordan River and praying at the Garden of Gethsemane. God met me at the checkpoint.