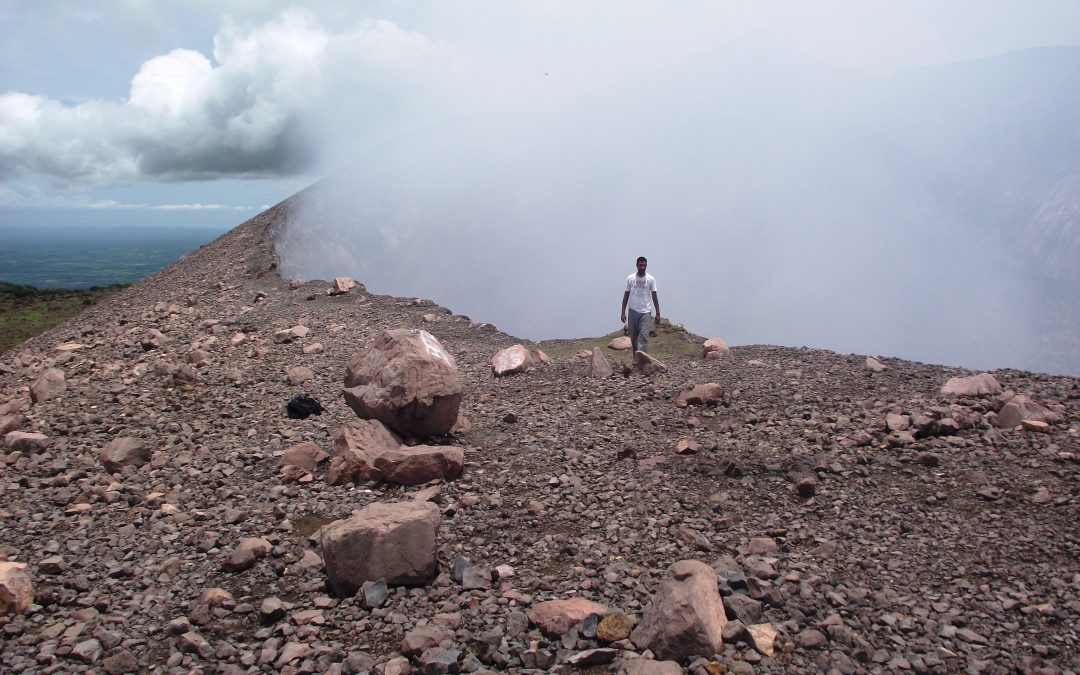 Roberto and I have been developing a friendship.  Since I have arrived in León, Nicaragua, we’ve been working together doing urban ministry trainings in different locations throughout the city.  Our mode of travel is Roberto’s motorbike. He drives and I hop on the back of that two wheeler and we make it work.  Nicaragua is a land of volcanoes and one day on our regular trips I was enjoying the view of smoking volcanoes in the distance.  I holler over the wind so Roberto can hear me, “I want to climb a volcano!”  He looks back, helmet on, visor down, and gives me a thumbs up.

Roberto, who is a nature lover and formally a biologist, took my request to see a volcano seriously.  After a few days we took that motorbike up the side of the small volcanic mountain called Cerro Telica.  The paths varied from black and sandy to stretches full of sharp rocks and boulders.  For our safety, I would often have to get off the bike and let Roberto go ahead.  He would wait in clear area for me to catch up on foot.  With the mountain sparsely populated we asked for directions whenever possible to make sure we had some general sense of where we were going.  The only clear direction we had was up.

You know, being in Nicaragua isn’t as big of a stretch for me as it might be for other Americans.  I’m a Latino born in the United States.  My parents are from Dominican Republic and Puerto Rico.  I know each U.S. raised Latino relates to their Latino heritage differently.  But, because of my parents’ cultural heritage and the way I was raised, several things about being in Latin America naturally suite me.  On a few occasions, I have felt more at home in this foreign land than I do in my own country.  For example, everyone here knows what a platano is and I don’t get strange looks when I tell someone I had one breakfast. However, since my time in León, there is one thing in particular that has required my adjusting.  I’ve had to learn to be okay with getting lost.  Here, the streets do not have names like they do in the States.  Houses and buildings do not have numbers.  You can’t look at finding your way as academic exercise.  Unless you already know where you’re going, you are left with no choice but to ask for directions and hope you are going the right way.

Asking for directions is one thing.  Dealing with the directions given is a whole different level of adjustment.  It’s not uncommon to receive directions, not to your destination, but to another point of reference where you should ask for help. Once the directions I received went somewhat like this: “You see that purple building?  Go this way (the person makes a random motion with their hands) two or three blocks past that building.  Well, the street isn’t really divided by blocks.  Kind of figure out the length of about four blocks past that building and look for a tree and a red door…  Ask someone a little further down the road and they can help you.”  Never mind there were a dozen trees and red doors.  Not to mention the relative way of measuring a city block.  Really it’s about being relational and learning points of reference (the Lake or the Cathedral for example). It’s about asking for help down the road.  It’s about a willingness to fail and to ask again for help.

The whole situation reminds me of a prayer Paul shares to the church in Ephesus.  In Ephesians 3:16-19 he writes, “I pray that out of his glorious riches he may strengthen you with power through his Spirit in your inner being, so that Christ may dwell in your hearts through faith. And I pray that you, being rooted and established in love, may have power, together with all the Lord’s holy people, to grasp how wide and long and high and deep is the love of Christ, and to know this love that surpasses knowledge —that you may be filled to the measure of all the fullness of God.”  You see the purple building.  Go four blocks past that, and God’s love is there to guide you to the next step.  We can’t go out of it.  We literally cannot fall out of the love of God.  It’s too wide, too long, too high, and too deep for us to escape.  Our ultimate point of reference is the cross of Christ, where His love was put on display for all to see.  To get lost is to be lost is His love.  And to be lost in Him, is to never be lost.

Maybe the interesting part of this journey is the relational bond we must have with those who have also become lost in Christ.  Can we learn to help each other along the way and receive the help?  Look for the tree…  Go south for about 5 minutes walking…  What you’re looking for is not too far, keep going straight.

3 hours after our journey began, Roberto and I reached the summit of Cerro Telica.  At one point the road was too treacherous for the bike.  We made the choice to leave it and climb up by hand and foot.  We both nearly slipped a couple of times, and I personally was not without my cuts and bruises.  But, we were at the point of no return.  We wanted to the see the majesty of God’s creation at the top of that mountain.

When we finally reached the top, Roberto gave a loud shout of victory.  We stood there breathless.  We could touch the thick smoky sulfur cloud of the active volcano.  After taking some pictures, Roberto and prayed for each other at the top of that mountain.  Then, I turned to look at the view.  And I am convinced now more than ever that God’s love is too high for me to escape.